A new version of CalTopo Offline and SARTopo offline has just been released (4151), with several major improvements:

1.  Real-time syncing between offline and online versions.  All of your maps from the website will show up in the offline version, and changes will automatically sync between the two.  If you make a change while offline, it will be queued until you regain internet access.  This is helpful both when starting a project online and then taking it into the field, and also when working in an area with unreliable internet, so that you can keep changes synced to the outside wold without being at risk if the internet dies.

2.  New map downloader that downloads offline map data within Cal/SARTopo Offline.  This makes it much quicker and easier to download large areas than the old web-based downloader.  Because the new downloader offers multiple resolutions and is built on a 15x15 minute grid, it also gives you more control over how large your offline maps are. 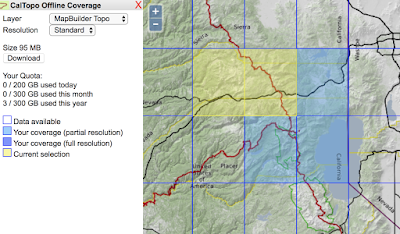 3.  Revised layer selection.  Elevation, slope and aspect data are all rolled into a single layer.  Shaded relief and slope angle shading are automatically computed from elevation data, and no longer need to be downloaded separately.  Most excitingly, MapBuilder Topo, Hybrid and Overlay layers now have full coverage for the contiguous US.

4.  Layer caching.  Map areas viewed in the offline version when you do have internet access are cached for later use offline.  So even if you haven't pre-downloaded an area, it may still be available when offline.
Posted by Matt Jacobs at 2:17 PM