The lack of recent posts doesn't mean a lack of development, only that the focus has been on bugfixes and minor improvements - from better compatibility with USB Mass Storage capable Garmins to decimal minute support in the PDF generator.  Still, for the last couple months two new layers were lurking in the background, getting brief bits of attention during downtime as I tried to wrap them up before the height of ski season.  The first of these is the SNOTEL data layer.

For those not in the know, here's the one-line description stolen from Wikipedia:


SNOTEL is an automated system of snowpack and related climate sensors operated by the Natural Resources Conservation Service (NRCS) of the United States Department of Agriculture in the Western United States.

SNOTEL has about 850 sensors, mostly in remote locations, that issue hourly reports on the snow depth, snow water equivalent and air temperature.  Some of those also record wind speed/direction, solar radiation and other measurements.  While the system was designed to track the nation's water supply, it also provides a wealth of information for winter time backcountry travel.

In my experience, accessing real-time SNOTEL data is inconvenient enough that I often don't bother.  The web site requires you to visit each station separately and pull up a chart; there isn't a good way to survey nearby stations at a glance.  They publish a KML file with recent station data, but it emphasizes percent of normal snowpack rather than current snow depth.

This isn't a criticism of the folks running SNOTEL, as backcountry recreation is very much a secondary use of the system.  Plus, they've been kind enough to make all the data publicly accessible through a webservice, so that people like myself can pull it into their sites and chart, graph and display it every which way we want.

So enough with the background, I'm happy to announce SNOTEL as the first dynamic, data-driven map layer in CalTopo.  It should show up as a checkbox just like the other overlay map layers, but here's a link as well.  In order to avoid overwhelming the SNOTEL servers, at low zoom levels you'll just see a map of all stations.  Standard stations are in red, stations with wind sensors in blue.

Zoom in a couple levels and each station gets a label with the snow depth in inches, the current snow density (10:1, 5:1 etc) and current temperature.  Hover over a station for a few more details. 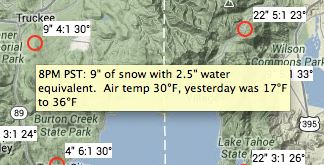 Click on a station to bring up a dialog with the 7-day sensor history and a link to the station's official webpage, where you can check out all kinds of additional charts and tables.

Each station reports snow depth, water equivalent and temperature separately, and those updates can take a while to reach the main system.  CalTopo displays the oldest date between those 3 sensors; if the photo above were taken at 9:05, snow depth could easily be as of 9PM while air temp is as of 8PM.

Another important thing to know is that the SNOTEL data can be pretty noisy, especially the snow depth reading.  If anything looks funny, it's best to click on the station and get a detailed graph.  Notice how snow depth (black) for the station below appears to drop during daytime highs (red):