Without much fanfare, the Forest Service recently redid its 7.5 minute quads.

The previous version, on CalTopo until now, was called the Primary Base Series.  They were produced "back in the day", offset printed, and then scanned into TIFF files.  They had roads and trails that were lacking on USGS maps, and perhaps just as critically, numbered road designations.  However they only existed for some forests, and these manmade features were quite a bit out of date.

These have now been replaced by a new, computer generated iteration called FSTopo.  Because the maps are rendered straight into a graphics file, they look nicer and have a higher resolution than the PBS series.  Coverage includes almost all national forest lands, including Alaska.

Unfortunately, while the FSTopo maps have some updated information, they're still a little out of date compared to actual roads and trails on the ground.  Even without any updates, the increased coverage and higher resolution would still make them a huge step up over the previous maps.

FSTopo has replaced PBS as the default map for "US Forest Service" and any saved maps or URLs will be automatically upgraded.  If you need access to the old maps, you can still get to them under Available Data Sources, as "USFS PBS". 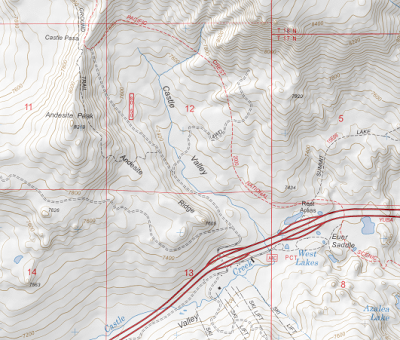